Many know I’m a Writer, Blogger, and Published Author, but did you know I also
have a Writers/Book Blog too?  As I’m on the internet a LOT, I come across some
interesting things. I try to write everyday in some form or another. And I have
revamped my Writers Blog, AND……have added some New & Fun features!

So I thought I’d share a post from my “OTHER” blog. I try to share stories, and information around the web that maybe some may not catch. I also started a
feature for, “Just About The Funny,” as I enjoy doing many posts in Photo’s.

My most POPULAR is my, *CATURDAY RAMBLINGS* posts. My visits shoot up
to all time highs when I do those! WHO doesn’t love Kitty Cats? I know I haven’t
done to many lately, because of having to give my 2 Kitty’s to good homes when
my husband and I had to relocate from So. Oregon, here to Arizona……

But, I have checked on them both, “Buttons & Callie” and they are doing Fantastic!
So I suppose I’ll start doing my “CATURDAY” posts again. Another new feature on my writers Blog is, “CREEPY STORIES” Here is a sample of a post I just did today….AND My Writers Blog Link:  http://www.simplesite.com/CatherineLyonAddictedToDimes ………

“Charles Manson Getting Married?” WHAT?
OK…..are you as “Creeped Out” as I am about the news that “Charles Manson” is getting married? How does this HAPPEN? Where does he meet his potential “Brides”? Now I’ve read it ALL! Yes, that’s the News floating around the web. What can this young woman be thinking? IF she’s THINKING AT ALL?!!  Here’s “THE SCOOP”………

First off, it creeps me out that he actually has a Facebook Page!! Here is a post of one of his Rants……I have NO Interest In Sharing the Link!…
“Put that on [the website], say, we must be saying something, because all these people are so jealous that they can’t seem to keep their hate to themselves. They wanna hate what they don’t understand. If they can’t understand it, that’s not [our] fault. Yea, that’s actually a witness for you. You know, we must be saying something [right] because we wouldn’t have all these people against us if w…e wasn’t. They’re all jealous. They’re ganging up on somebody, why are they ganging up on it? Well, we’ve always been at the bottom, there ain’t nobody helped me.”
..
“If you look at, the only thing that’s made me famous is the people who are against me. The people who talk shit about me are the ones that made me into who I am. If it wasn’t for that lying-ass district attorney, I would have never been “Charlie Manson”. He made “the family”. He made it with his bullshit. He made it with all them filthy fuckin’ lies he told in the courtroom. That’s the kind of people you’re dealing with. They think to discredit you is gonna make them better. They think they wanna build their dream on the destruction of your dream. The only thing they got going is, to down somebody else – they have nothing going, they just wanna keep somebody else from making it. They don’t wanna make it; they wanna stop somebody else from making it because they can’t make it. They can’t make it unless they feed on somebody else. Look at everything they’re doing”….
..

“That’s what this person said to me when I mentioned a similar thing to them about what people were doing to me, and he said he can’t understand why people want to talk bad about me, “because of you there’s a song in my heart, because of you this romance had its start – because of you the sun will shine, the moon and stars will say you’re mine, forever…” You know, they wanna be down on the very same person that they’re feeding on. It don’t make no sense at all”
..

**People have ACTUALLY Donated to his Lawyer Fee Donation Site? WHAT?** Here is one of MANY stories around the Web about him getting Married….

By Lauren ZimaCourtesy of Newsy.com

Charles Manson has this sadly brilliant way of managing to make it back into the headlines, doesn’t he?

This time, it’s because a 25-year-old woman named Star says she’s ready to marry the 79-year-old convicted killer. He gave her that name, and she recently cut an X into her forehead for him.

The story started with this Rolling Stone interview with Manson and Star. She tells the mag they’re getting married, and she already considers Manson her husband.

​​She sees him on weekends — up to five hours a day both Saturday and Sunday — many visits are catalogued on this pro-Manson website. And all this has Geraldo Rivera asking…

“Why is Manson so charismatic to this new generation? I remember when ‘Manson’ was the biggest selling T-shirt in the country. He has this dark appeal…” (Via FoxNews)

Well, Charles Manson’s official Facebook page has about 11,500 likes. Not terrible, but certainly not impressive by today’s social media standards.

CNN spoke with Star back in 2009 — and says, actually, when she first discovered Manson years ago, it was apparently for his environmental writings. She did not know he was a convicted murderer.

“What is it about him, compared to other people you’ve met in your lifetime, that makes him so unique and different?”

“Charlie always tells the truth. No matter what.”

Well, the truth is, he’s one of the most infamous and terrible convicted murderers of all time. But late-night hosts had fun playing with the unknown — like how these two really first connected.

However they met — there seems to be some contention in the happy couple over whether they actually are getting married.

Because Manson told Rolling Stone: “That’s a bunch of garbage. You know that, man. That’s trash. We’re just playing that for public consumption.”

Well, it’s working. Oh, and in case you were wondering — Manson and Star don’t get conjugal visits. “Lifers” don’t get them in California…..

WHO IS SHE?…….STAR….Charles Manson’s Girlfriend…

Star is 25 years old, comes from a town on the Mississippi River, was raised a Baptist, keeps a tidy home, is a prim dresser, has a fun sense of humor. Charlie is probably the most infamous convicted killer of all time. He’s been called the devil for the way he influenced friends to murder on his behalf. He’s spent the past 44 years in prison and nearly 60 years incarcerated altogether, meaning he has spent less than two decades of his life as a free man. He will never get out. For her part, Star has been living in Corcoran for the past seven years, since she was 19.

..
It wasn’t Charlie’s murderous reputation that drew her here but his pro-Earth environmental stance, known as ATWA, standing for air, trees, water and animals. She has stuck around to become his most ardent defender, to run various give-Charlie-a-chance websites (mansondirect.com, atwaearth.com, a Facebook page, a Tumblr page) and to visit him every Saturday and Sunday, up to five hours a day, assuming he’s not in solitary or otherwise being hassled by the Man. “Yeah, well, people can think I’m crazy,” she likes to say. “But they don’t know. This is what’s right for me. This is what I was born for.”

**SO YES, I now read it ALL…..LET THESE WORDS SINK IN, they are comments made by “BOTH STAR & MANSON” to a question asked by a Reporter, Why Did He Kill? and how STAR felt about it, It will CREEP YOU OUT!**
..

Star tells Rolling Stone with surprising intensity that she does not “give one f… whatsoever about 1969” and calls Atkins a “crazy f…… whore. ‘Oh, Charlie, I did this for you.’ She didn’t know what she was doing. That girl was just a piece of s…, a whore, and just plain f…… crazy psycho.” 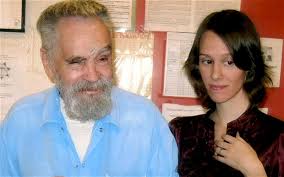 SOUNDS TO ME THEY REALLY BELONG TOGETHER, YOUR THOUGHTS?