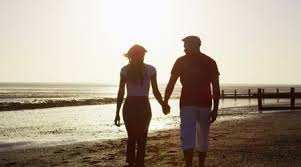 Since I have been lucky and blessed to be happily married to my soulmate for almost, well, let me say a long time. Our wedding song was by Guns N’ Roses ~ Sweet Child O’ Mine! We got married after a year living together as I didn’t want to marry again as my ex-was a closet alcoholic at a young age. It was a horrible 4-year experience I did not want to be repeated. And, of course, this was years before I became an addict myself.

Now that I have all that behind me, I have heard many times sitting in meetings and even in my treatment group years ago, by someone, obviously single, would ask the question, “when is it OK to date or start a relationship while maintaining recovery?” Well, I always heard not for at least one or two years into recovery.

We need to be focused on our #1 priority, GETTING Clean, Sober, or Bet Free first. And I think using “Common Sense” in this situation should rule. Look, if you are NOT WELL, how can you be good relationship material with someone else?

Think about that! And that is why I am sharing this article this weekend from the fine folks of the magazine, “The Fix.”

IT is why I am sharing the article. It may help clear up the ‘ole’ question of “Dating in Recovery” By Kiki Baxter

“When my sponsor told me about the suggestion to not date for a year, that I should just concentrate on getting sober, I said: “I’m a really good multi-tasker.”

I thought that when I got sober, I’d get into the best shape of my life, start going to the gym all the time, train for a triathlon, become super successful and meet the man of my dreams. Basically, my version of what advertising says is a ‘perfect life.’ I wasn’t thinking along the lines of what some people say: the gift of sobriety IS sobriety. Boring. I mean, I was and I wasn’t; I mostly just wanted to stop being miserable. I did a 90 and 90, got a sponsor, joined a gym, took a class in my career of choice, slept a lot, and met a guy.

When my sponsor told me about the suggestion to not date for a year, that I should just concentrate on getting sober, I said: “I’m a really good multi-tasker,” and “I can get sober and date at the same time.” Luckily for me, she didn’t say it was a rule because there are no rules in the Big Book of Alcoholics Anonymous. Nowhere in the Big Book does it say: “no dating allowed in the first year.”

It just talked about some people prefer a little more pepper in their sex life or whatever (page 69) and who are we to tell people what spices to proverbially cook with? So thank god for that because, in my first 90 days, I met a guy. He was a friend of a friend and when we met, he told me that he was going through a big transition in his life.

“What kind of a transition?” I asked while thinking Oh my God! We have so much in common! We’re both going through transitions! As if a relationship could be built on that alone. Or even a marriage, because I thought that now that I had opened the book of sobriety, everything would change in the blink of an eye. It would be like I just woke up to a new life. That’s how it happens, right?

I mean, don’t you kinda hear that all the time? The person’s life was shit and then they got sober and now they’re in this awesome marriage/job/house/car/babies and it all like happened in a year or maybe two? I’m smart and attractive. That shit should happen for me too! I can make that happen. I. CAN. MAKE. THAT. HAPPEN. Higher power who?

So, when I asked the guy what kind of transition, he said poetically, “It’s like my house was taken away so now I have no house, but at least I can see the moon.” And I was like “Wow, coooooool. I totally love the moon.”

For our first date, we went on a bike ride along the river, had lunch where I did not order a glass of wine (the first time that has ever happened) and ordered a coffee instead. I didn’t tell him that I was newly sober. I just told him I didn’t drink, and he said that was cool and he’s thought that maybe he should quit drinking too (uh oh); that he meditates and when he meditates, he feels super clear and drinking gets in the way of that (uh yeah).

Then he walked me home and I remember feeling very sensitive and insecure. It was like I was eight years old again with a crush on a boy at school and I forgot how to walk my bike. Or talk. I felt awkward. Which is why, at 16, drinking and boys went hand in hand. Less feeling. More yay.

When I got home, I realized there was no way I could date right now. I knew that if I was rejected or even felt rejected, it would probably cause me to drink. I didn’t have the emotional tools. I talked to my sponsor about it and then called him up and said, “I really like you, but I’m going through something right now where I need to take a year off of dating. I hope you understand.” And he said, “Wow. I should probably do that, too.” Turns out he was going through a divorce and was in no place to be in a relationship or be the man of my dreams/dysfunction right now.

For the rest of the year, I concentrated on going to meetings, fellowship, making new AA friends, eating cookies and milk, binge-watching Netflix at night, and it was the most awesome/horrible year of my life. I highly recommend it. I gained 10 or 20 pounds which seemed weird. Dudes can go through a rough time and get fat and grow a beard and still be considered likable — but as a woman, it’s harder to hide behind a beard and 50 pounds and be cool. But a girl can dream.
.

So, a year later, guess who I ran into? No-house-moon dude. And yay! I was like a year sober so totally awesome and fixed, right? It. Was. On. We went on a few dates, and I honestly can’t remember if we had sex. It was only seven years ago and I know we did sexy things but I cannot for the life of me remember. I don’t think we did, because we would have needed to have the talk and well, let’s just say that the time I chose to have the talk was not a good time to have it.

Take it from me when I say “DO NOT ATTEMPT TO HAVE THE TALK WHEN HIS HEAD IS BETWEEN YOUR LEGS. ” That should be in the Big Book. It’s a real buzz kill for one and all. And our relationship (if you can call it that) ended shortly thereafter which was okay because he was seriously still mourning the loss of his ten-year marriage.

So that’s my take on dating in the first year. I do know a couple people who hooked up in their first year of sobriety and 30 years later are still married. That might happen to you. I knew that wasn’t going to happen for me. It wasn’t until year two that I met the man of my dreams AKA qualifier who really brought me to my knees (not in a good way) and into Sex and Love Addicts Anonymous which is like the nicest thing a guy can do. Kidding. But not in a way because Girrrrrrrl, I needed some of that SLAA in my life.

Since then, I’ve moved to a place that I am happy to call home, am “healthy” dating and more will be revealed. But the best thing is that I like myself – dare I say, love, myself? I love my friends, my career, and my life and I don’t expect a man or any person or thing to save me.

WHY? Because I don’t need saving anymore. Thank god. Thank HP. Thank my program. And thank you.

Please visit so you can read more amazing articles like this one on “The Fix.”